South Korea has conducted an exercise off its southeastern coast to help improve the country’s ability to deal with threats from Somali pirates.

The exercise involved a mock pirate attack on a merchant ship, which was then rescued by troops using helicopters and high-speed boats, the ministry said. 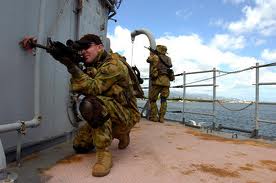