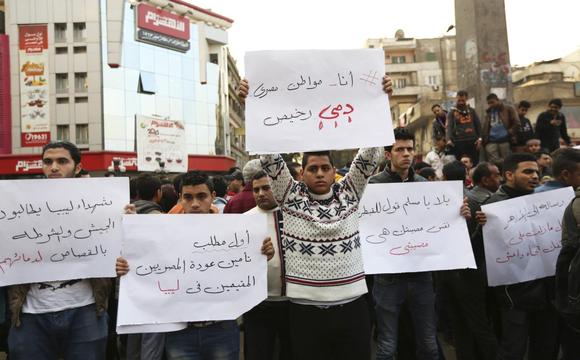 Egyptian Christians hold placards during a protest against the killing of Egyptian Coptic Christians by militants of the Islamic State in Libya, in Cairo February 16, 2015.
Credit: Reuters/Mohamed Abd El Ghany
(Reuters) – Egyptian President Abdel Fattah al-Sisi has called for a United Nations resolution mandating an international coalition to intervene in Libya after Egypt’s air force bombed Islamic State targets there.
“There is no other choice, taking into account the agreement of the Libyan people and government and that they call on us to act,” he told France’s Europe 1 radio in an interview aired on Tuesday. “We have to work together to defeat terrorism.”
Egypt directly intervened for the first time in the conflict in neighbouring Libya on Monday after an Islamic State group in the country released a video showing the beheading of 21 Egyptian Christians.

Sisi said a 2011 NATO operation, which played a critical role in toppling Muammar Gaddafi, was an “unfinished mission”.

The Western alliance imposed a no-fly zone on Libya and used air power to try to prevent Gaddafi’s forces attacking civilian areas held by rebels. But it then did little to prevent the country sliding into anarchy and chaos.
“We abandoned the Libyan people as prisoners to extremist militias,” the Egyptian president said.
Ahead of a U.N. Security Council meeting on Wednesday on the situation in Libya, Egypt’s foreign minister met on Tuesday with ambassadors from the council’s five veto-wielding powers – the United States, Britain, France, Russia and China.
In Washington, State Department spokeswoman Jen Psaki noted the U.N. meeting and said, “Obviously, we all have a concern about the threat of (Islamic State) and there will be a range of proposals put out there, but we’re not going to get ahead of any process.”
The United States, Italy, France, Britain, Spain and Germany issued a statement on Tuesday saying a U.N.-led process to establish a national unity government in Libya provided the best hope for confronting the country’s violence and instability.
Libya is separated from the Italian island of Sicily by only a few hundred kilometres of sea, and has been the launch point in recent years for hundreds of thousands of African and Middle East migrants seeking a better life in Europe.
Italian Foreign Minister Paolo Gentiloni and Defence Minister Roberta Pinotti have both said Rome would be ready to join any military intervention, but Prime Minister Matteo Renzi has struck a more cautious note.
The Vatican’s top diplomat urged “a response agreed to by the diplomatic community under the auspices of the United Nations and as rapidly as possible”.
After a meeting with Italy’s president and prime minister, Secretary of State Cardinal Pietro Parolin said that “any armed intervention must be done according to the norms of international law and therefore under a U.N. initiative”.
Pope Francis expressed deep sadness on Monday at the killing of the Coptic Christians. Speaking in the past about Islamic State, he has said it is “lawful” to stop an unjust aggressor.
Sisi urged the outside world to send weapons to Libya’s internationally recognised government, which is based in the eastern city of Bayda after rivals seized power in Tripoli.
The Bayda government has also asked for the lifting of an arms embargo to help it take back control of the country.
(Reporting by Mark John; Additional reporting by James Mackenzie in Rome, Michelle Nichols at the United Nations and Lesley Wroughton and Peter Cooney in Washington; Editing by Kevin Liffey, Toni Reinhold)