Violence and tensions between ethnic Albanian groups and the authorities in the Former Yugoslav Republic ofMacedonia are threatening other countries in the region, Serbia’s prime minister has warned.

Speaking in an exclusive interview with Euronews, Aleksander Vučić said his country was ready to offer assistance to help address the situation.

“We’ll invest everything needed to help them out, to overcome these bumps on the road, create a stable environment in their country and whatever they think might be helpful, we’ll deliver on it,” he told Isabelle Kumar. “Because that is the most important issue for all of us. Because if we have riots and unrest in Macedonia, it might easily spill over to other areas of the western Balkans.”

The United Nations has also expressed concern at the events of recent days which saw security forces involved in gun battles on the streets of the northern town of Kumanovo.

People from a range of ethnic groups have gathered in Skopje to remember the eight police officers killed in in the clashes.

Fourteen suspected ethnic Albanian militants died in the clashes in the northern town. A further 30 people have been detained on terrorism-related charges.

Over half of those detained are from Kosovo, the government claims, although the reason for the attack is unclear.

Militants of mainly ethnic Albanian origin, fought Serbian forces in Kosovo during the late 1990s. The province secured its independence in 2008.

Aleksander Donev, from the FYROM capital Skopje, spoke about his reasons for attending the memorial :
“We are here with our Albanian friends and those from other ethnic communities, and we are all united, together,” he said. “That is what we want to show and to fight for the freedom and democracy that we deserve.”

As calm was restored to the Divo Naselje area of Kumanovo town, FYROM’s interior ministry released a video purporting to show some of the arrests made during the clashes.

Zoran Zaev, the opposition Social Democrat leader, says he suspects authorities of stirring up unrest to draw attention away from a political crisis in the country. Heightened political tension has provoked widespread demonstrations. 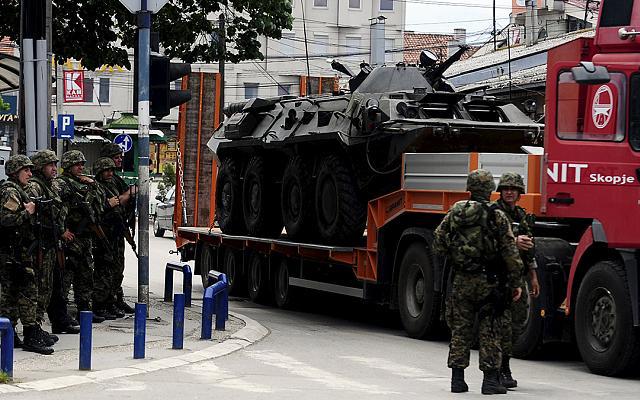